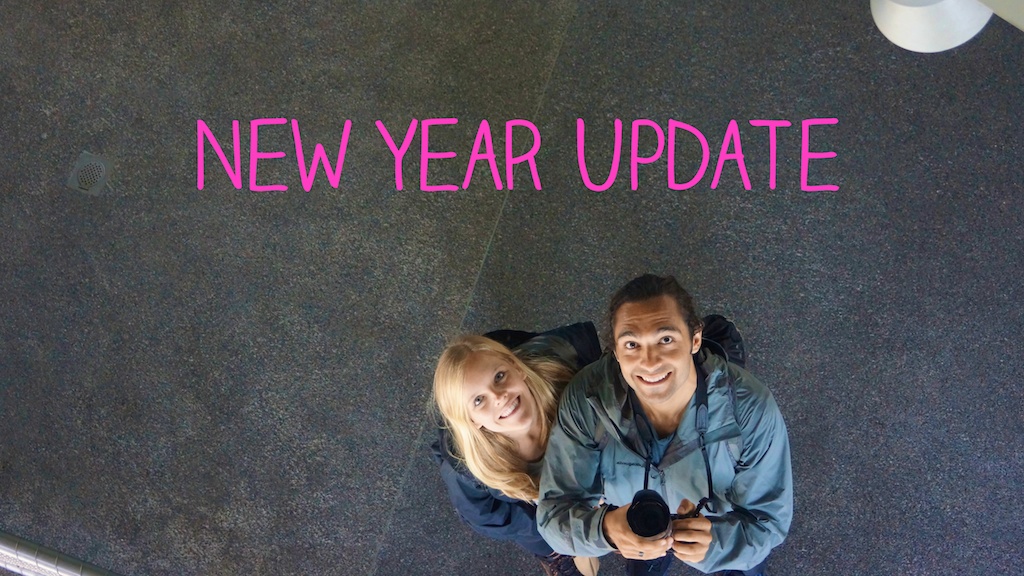 It’s been a while since we posted anything, so we thought it was time for an update. Many people are asking to see pictures and hear about our travels, so here goes!

As you read in our previous post, Choosing the Open Road, leaving Hawaii wasn’t so easy. But once we landed in Indonesia we decided to leave all the stress behind and were excited to start a new adventure.

We landed in Bali at midnight and were greeted by my uncle John and his friend Wayan. Although I hadn’t seen John in ten years, he still looked and acted the same way I remembered! My uncle married a Balinese woman a few years back, so I was eager to meet his new wife and my new auntie, Ketut.

Matt and I agree that Ketut is one of the sweetest people we have ever met. She always puts everyone else first. She insisted that we relax and take it easy the entire time we were there. She was constantly in the kitchen making us tea, coffee, banana pancakes, eggs, fruit, noodles and more, with the biggest smile on her face. We miss laughing and joking around with her! 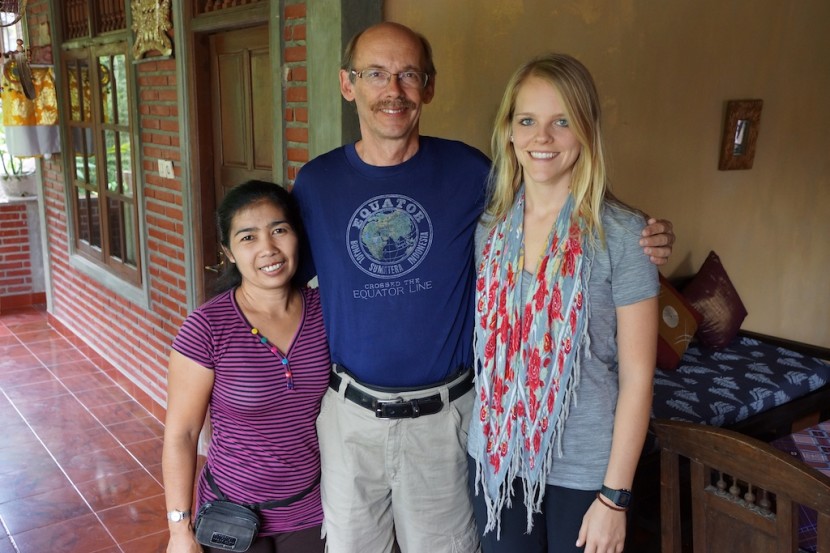 As far as cycling goes, we only did one long ride in Bali and it was a nightmare. Wayan, the owner of the guesthouse we stayed at, gave us directions for a cycling route, but because of the language barrier, we got a little confused. Our 10 mile ride turned into a 20 mile ride straight uphill in the heat of the day. Here is a drawing to better explain.

All in all, we had a great time in Indonesia. The food was cheap, accommodation was simple but comfortable and only $10 USD a night, and everywhere we went the people were unnaturally generous and welcoming. We were lucky to travel around Indonesia with my aunt and uncle, who lived there for many years and could speak the language. Thanks to Ketut’s expert negotiation skills, we saved lots of money on cab rides, food and souvenirs. We miss them and Indonesia very much! 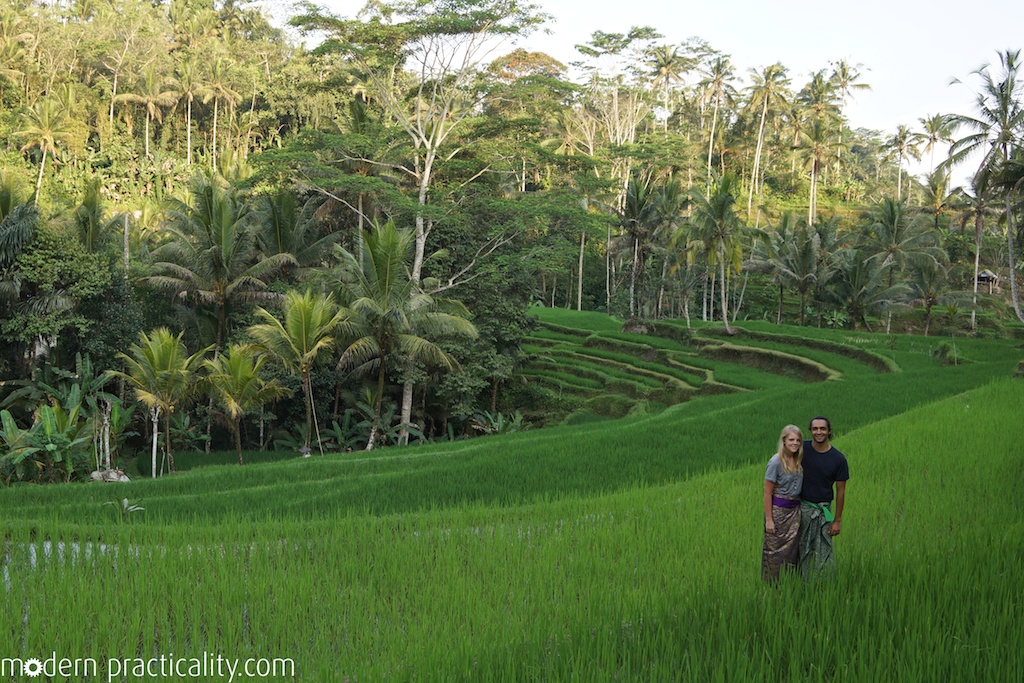 We flew from Bali to Singapore at the end of October. This is when the cycle tour officially started. Our first impression of Singapore was that it was an architectural marvel but very expensive. 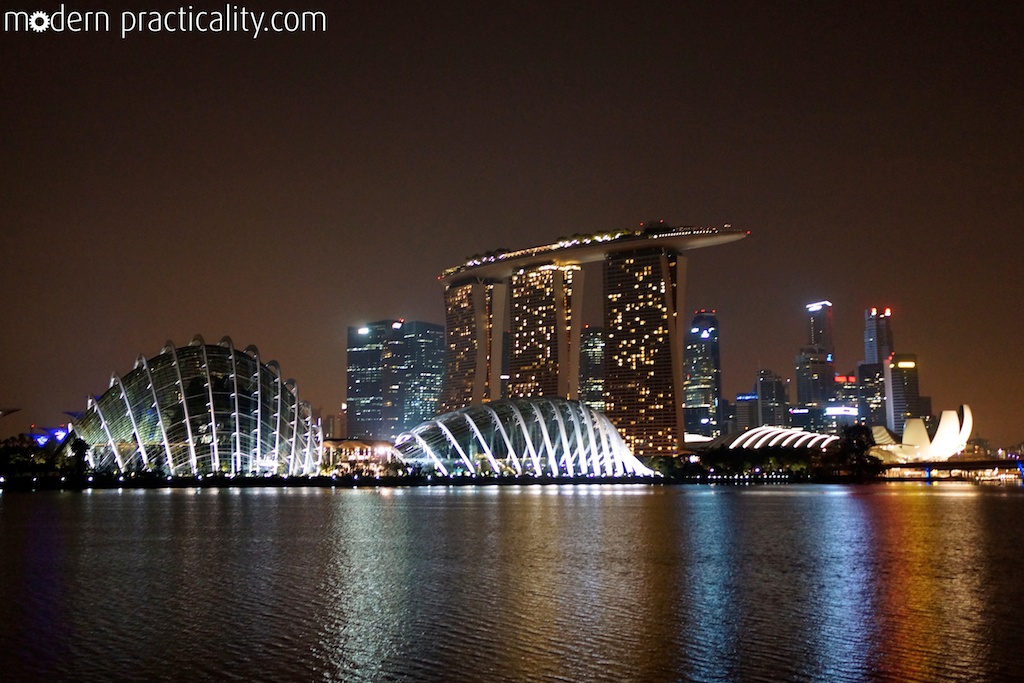 We spent our first few nights in Little India, the most reasonably priced part of the city and where you can find some of the best food. Even in the cheapest part of town, an average room is the size of the queen size bed that’s in it, has a combination toilet/shower, lacks a window and costs $80 USD a night. Fortunately, our next three nights were free because we stayed with Jan, a German-expat programmer and aspiring chef we met through couchsurfing.com. He lives in a luxurious high-rise condo located in the Central Business District, right in the heart of the city. 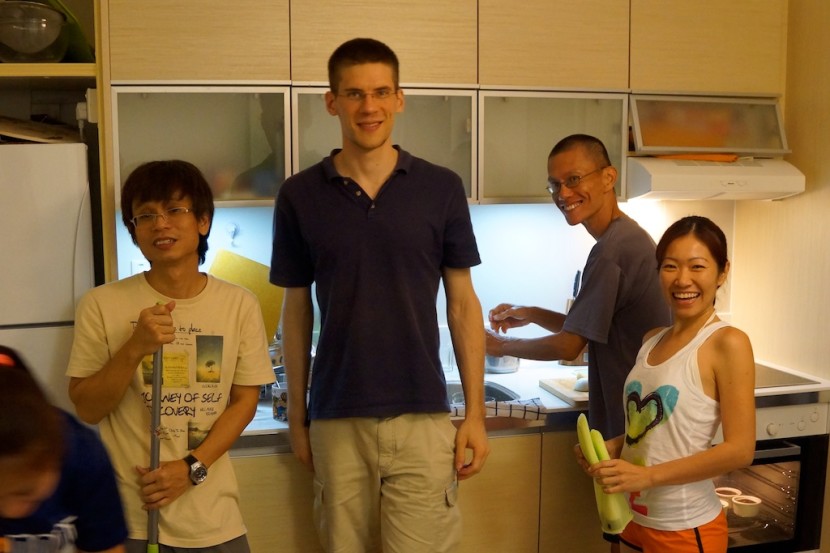 We played ultimate frisbee with him and his friends, had a dinner get-together, cycled around Marina Bay at midnight, went on a night safari, ate at a delicious dim sum restaurant, tried Jan’s homemade chocolate, and visited the largest greenhouses in the world. 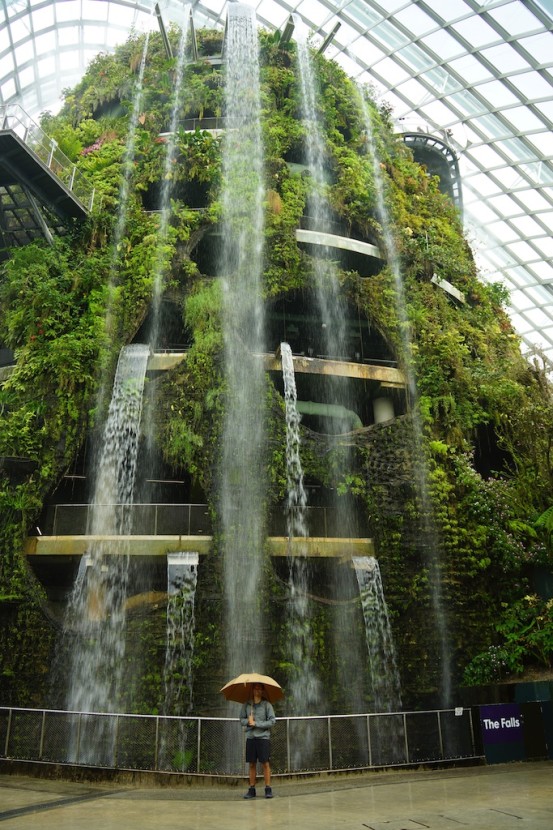 We really enjoyed Singapore, but were eager to leave because we spent too much money!

Before starting our cycling epic, we thought of Malaysia as that country between Singapore and Thailand. After almost 3 months, we can now say that Malaysia is one of the best places we’ve ever visited! The people we’ve met here through Couch Surfing and HelpX have been incredible. HelpX is an especially great way to travel. Not only do you get free food and accommodation in exchange for a modest amount of work, but you develop new skills, meet locals and integrate with their culture.

The Malay language is extremely similar to Indonesian so at this point in our trip we have absorbed enough words and phrases to communicate on a basic level with the locals. It’s always fun to see people’s shocked reactions when they hear the two “bules” (foreigners) greet them or order food in their native tongue.

The food here is AMAZING and super cheap. A plate of rice, curry, veggies, fish, chicken, and tempe will set you back $3-4 USD, and if you only get veggies it’s about $1-2 USD. A coffee or tea is about 50 cents, a refreshing change from the $5 cups we enjoyed back in the States!

So far we have cycled about 600 miles from Singapore. When we first started cycling, we could only handle around 30-40 miles a day. Now that we have horse legs and disturbing tan lines to match, we are up to about 50-60 per day. Mechanical issues have been kept to an absolute minimum. We’ve only had two flat tires and one small collision. The crash involved Matt and a 70 year old man on a motorcycle who forgot how to use his brakes. Matt’s rim bent completely and the man’s mirror broke, but no one got hurt! Fortunately that evening we were staying with Khalib, a retired Malaysian special forces soldier who cycled the world and knew how to true a wheel. The wheel is not 100% fixed, but it’s pretty darn close!

We spent a week with Khalib and his family, who are just as enthusiastic about cycling as he is! Just take a look at their kitchen! 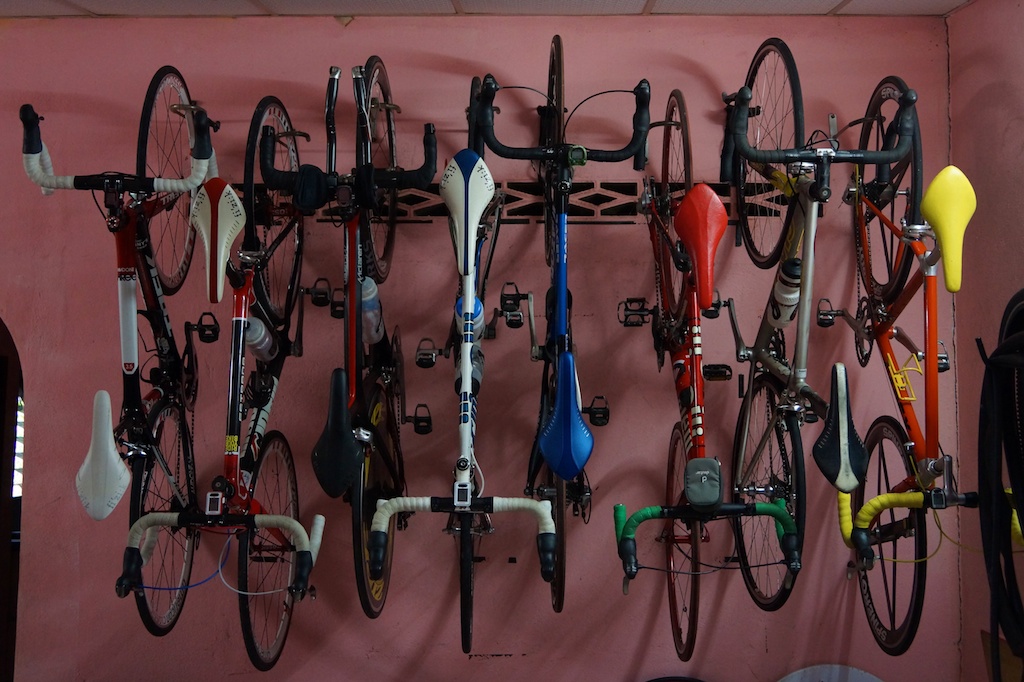 We had a great time participating in the weekly family bicycle ride, learned how to make pandan cake, helped out at the family rubber tree farm and were invited to two Malaysian weddings. Khalib showed us some great pictures from his own bicycle adventure, and encouraged us with stories of the kindness of strangers all over the world.

Though we were sad to say goodbye to our new adoptive family, we will be seeing them again. As we made preparations to spend 3 weeks in Borneo, Khalib graciously offered to keep our bikes at his place until we return to spare us the stress of packing and shipping them.

When we emerge from the jungle and can find some consistent internet access, we plan to post travel guides, recipes, veggie facts, pictures and a video soon!

For now, here are some recent pictures we wanted to share. 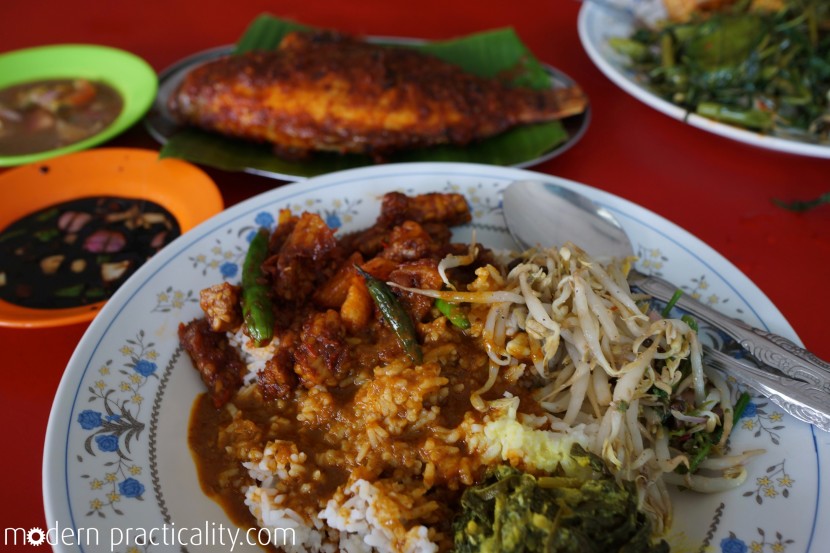 This is the typical food you get in Malaysia. This is rice, curry, veggies and fish. I think this was about $6 for 2 people. 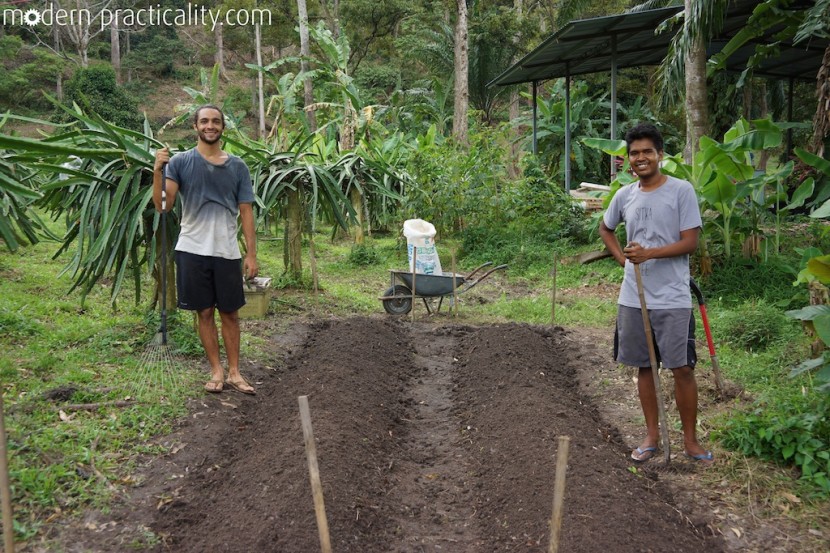 Matt and our friend Arafat, the entrepreneurial mind behind Kebun Kaki Bukit.  We will be posting a video soon, teaching you how to make raised garden beds like the ones pictured above. 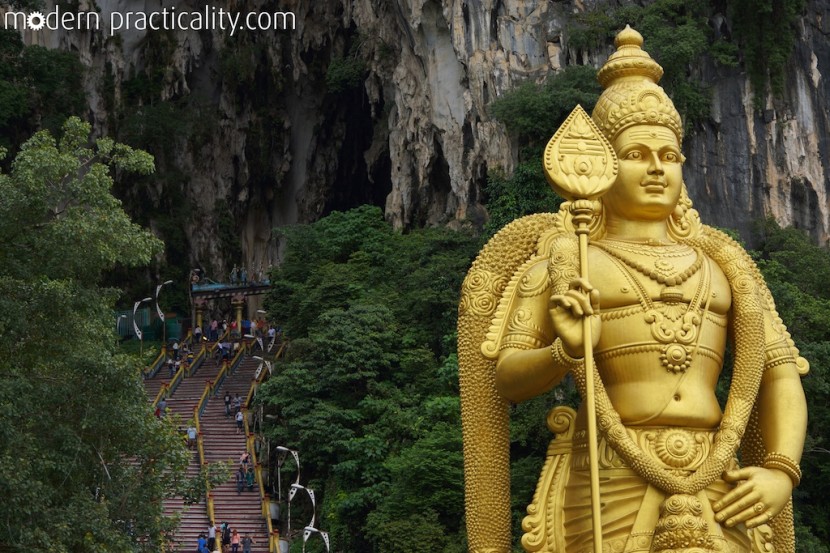 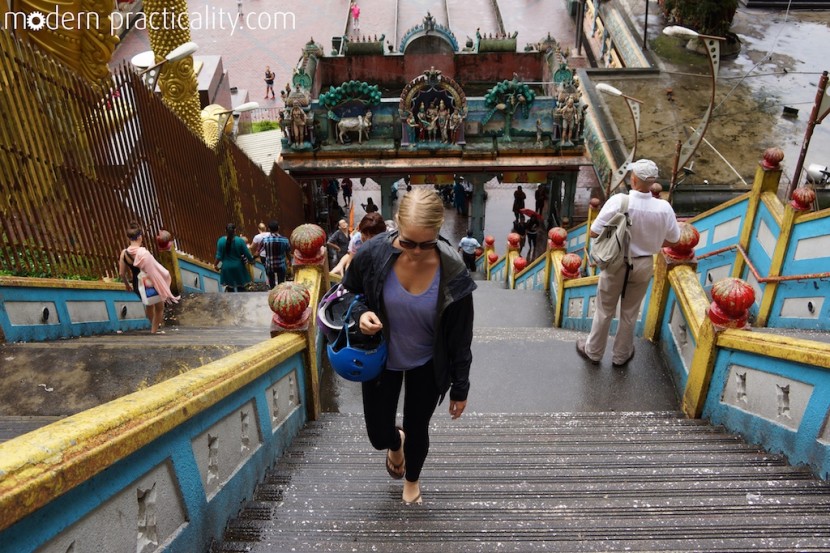 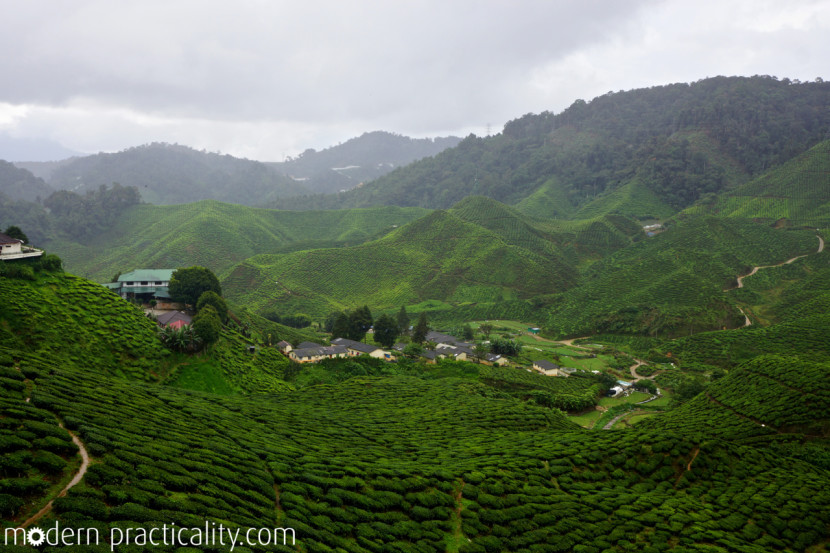 A tea farm in the beautiful Cameron Highlands. 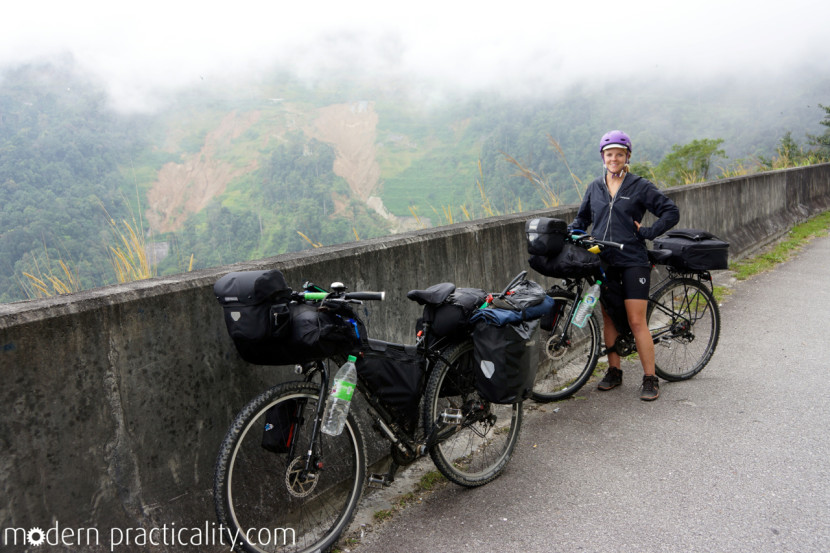 Cycling through the Cameron Highlands. The first 10 miles were a grueling uphill battle, followed by a 50 mile downhill coast. 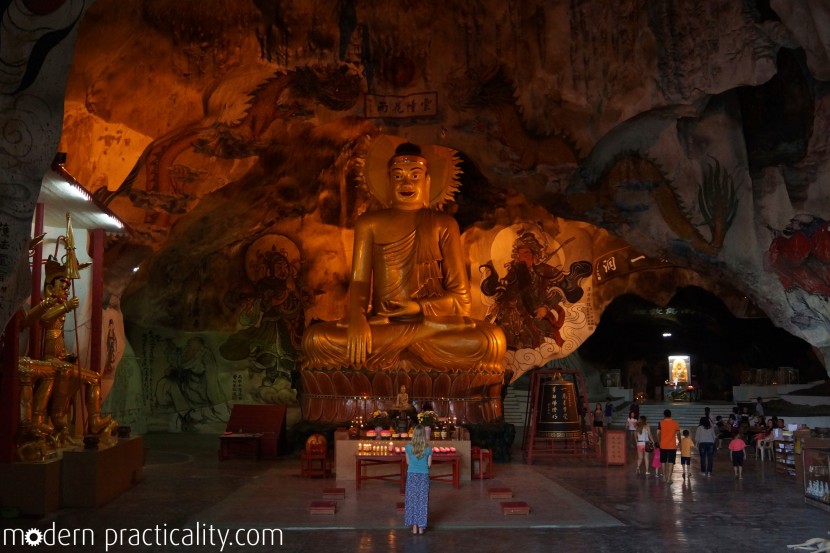 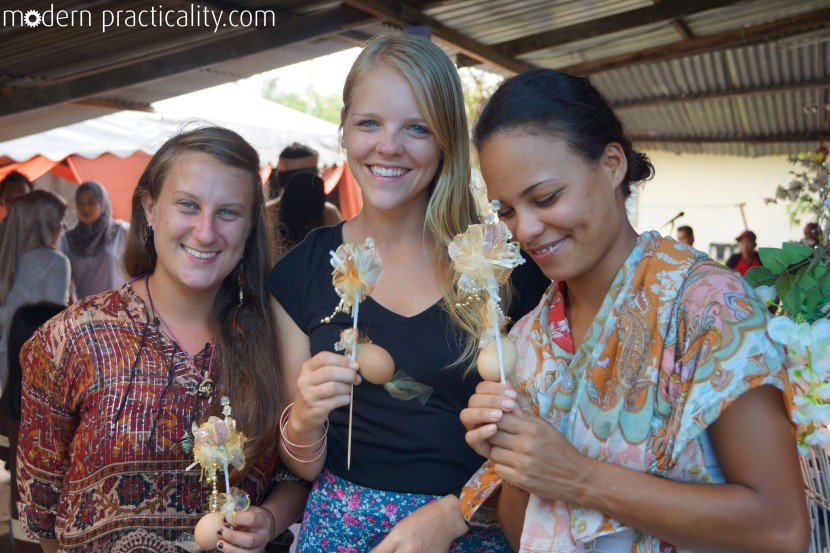 Our friends on the farm. Becky (left) was a hilarious English girl with the thickest accent who taught us what it means to faff. She is currently traveling to farms and bed and breakfasts around the world to learn how best to manage one, with plans to start her own in the coming year in Colombia. Sandra (right) is a talented graphic designer from France who has been traveling for the past three years. We met up with her again in the Cameron Highlands and hope to meet up with her again in Thailand! 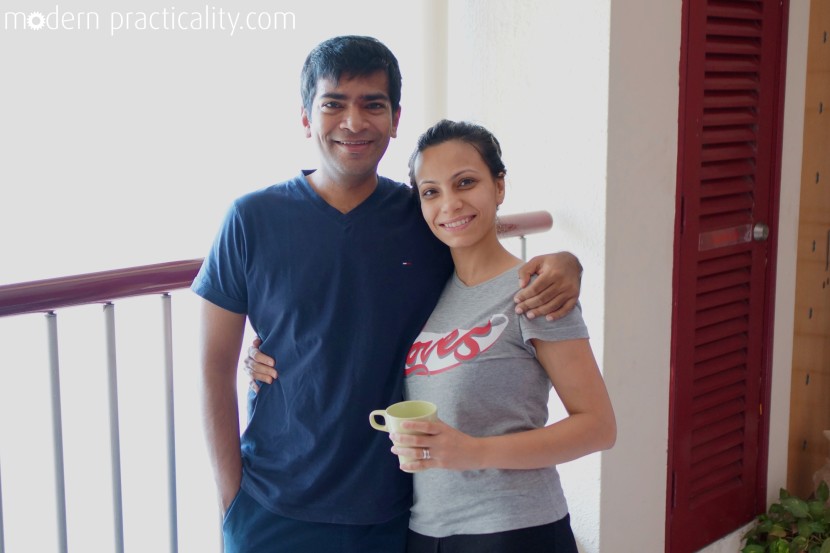 Our hosts in Kuala Lumpur.  They both work in advertising.  They joined couch surfing so they could meet people from all over the world.  We were going to stay with them for 3 nights, but ended up with them for 5 nights.  They were really sweet 🙂 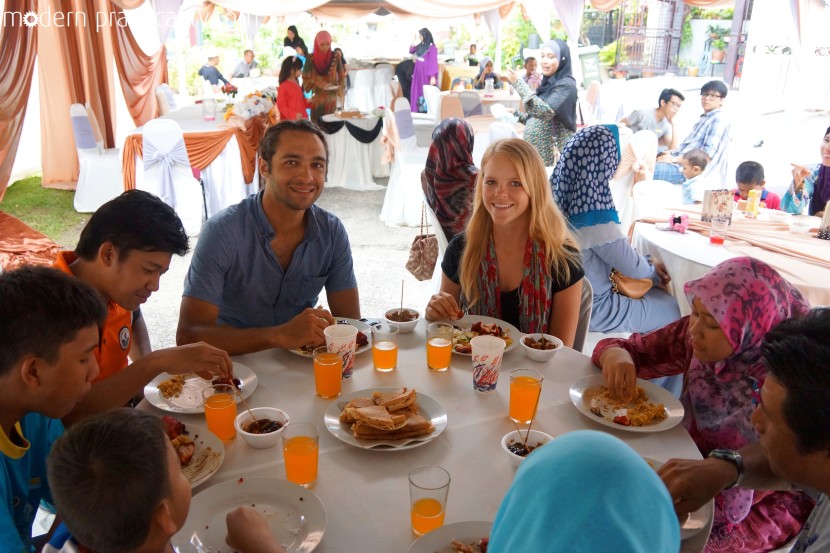 At a traditional Malay wedding with the family we stayed with in Serdang.  We actually went to two weddings this day.  Everyone in town goes to the weddings and it’s normal to show up, eat and leave. 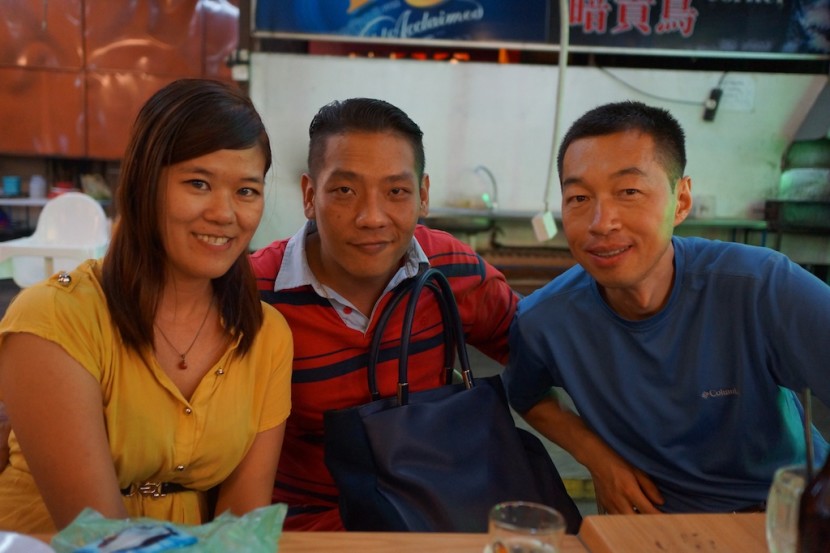 Jacqueline, our couch surfing host in Penang with her friend and another couch surfer, Adam.  Adam loved to talk… a little too much. 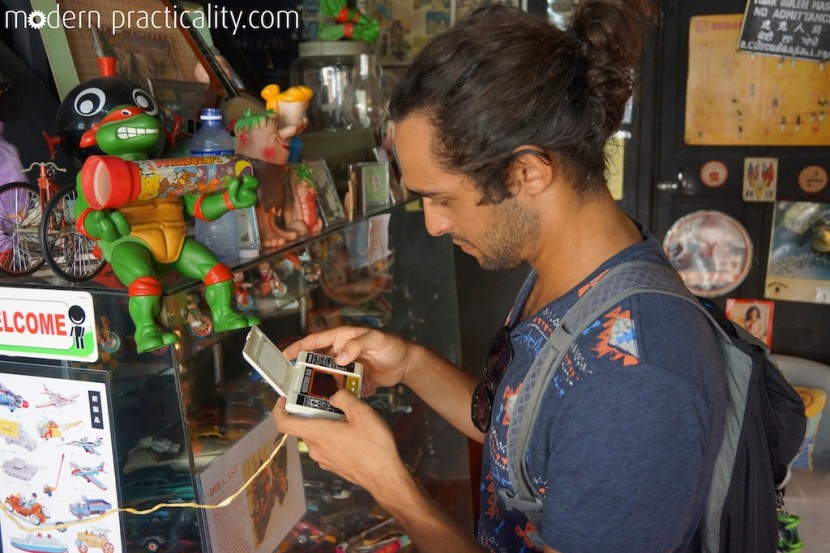 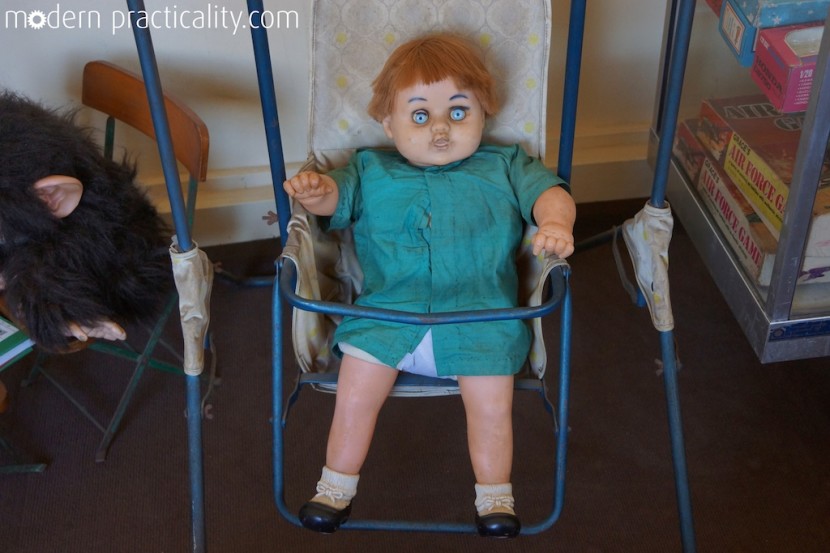 Having fun at a toy museum in Penang. 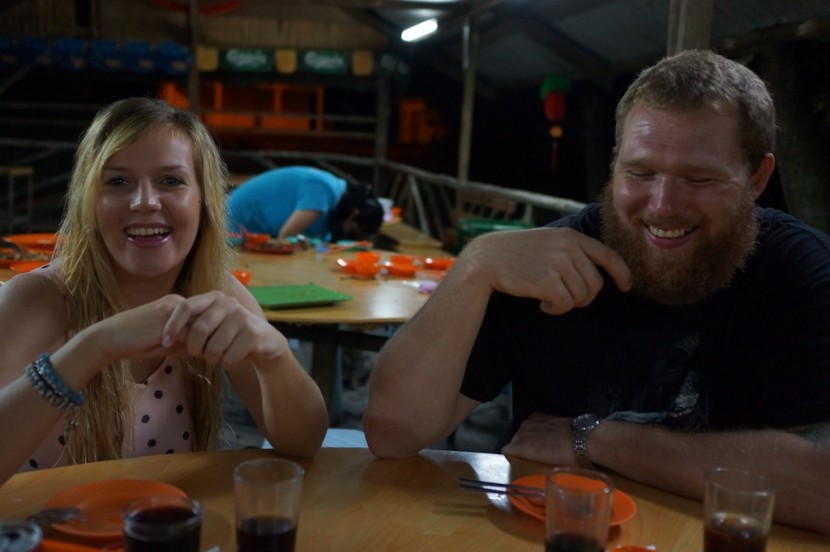 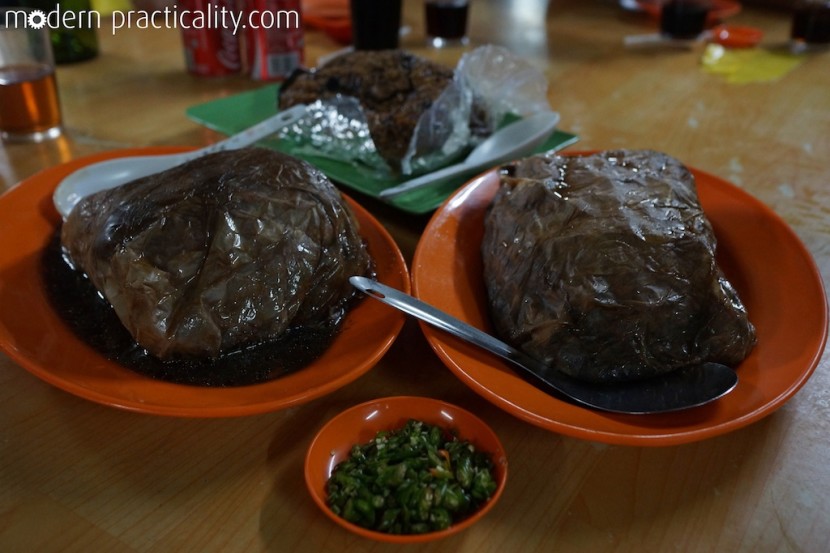 Our New Years dinner with our friends at Kebun Kaki Bukit.  1 duck, 1 chicken and 2 pig legs. One for each of us!

Just wanted to check in with everyone, share a few pictures and let you know we are healthy and safe 🙂